What was a clear sky an hour earlier can turn into a raging wind storm the next hour. But that wasn’t going to detract from our excitement of heading for our next destination, Divide Lake. It’s about a 3.5 mile hike, I know a 3.5 mile hike doesn’t sound like much but with a 50lb pack on your back you’re going to be burning a few calories. 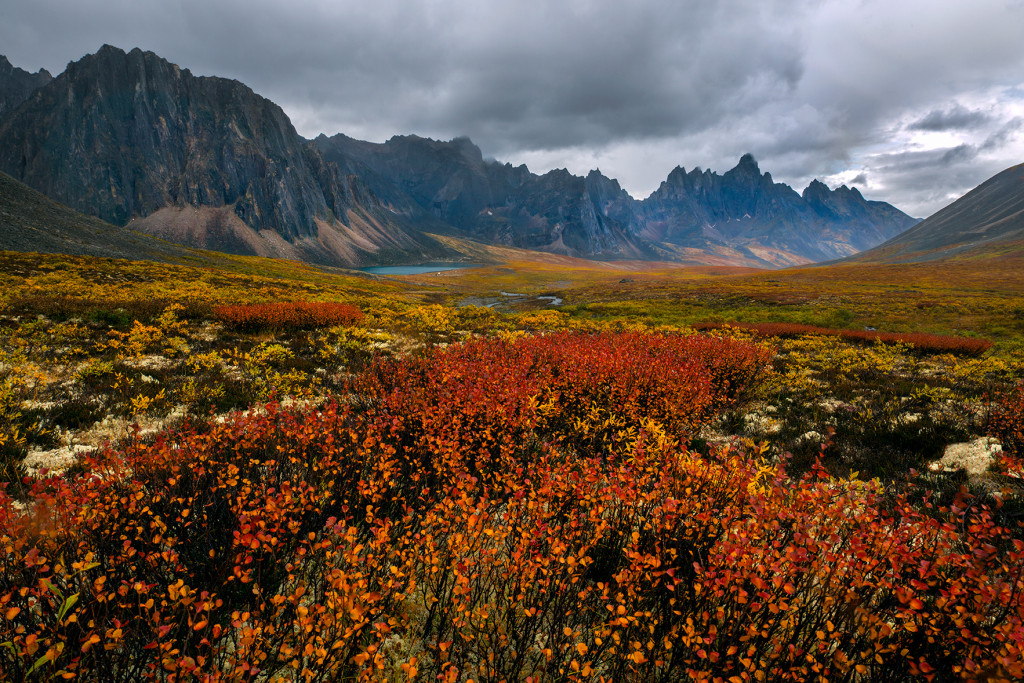 looking back a Talus Lake. Can you see the tents by the lake?

We were 2500 miles from home in the middle of nowhere and who should fly in by helicopter but Marc Adamus. He brought a group of seasoned photographers ready to hit the trail but first he imparted some valuable information on us; a large storm was scheduled to be in our area in the next couple days. Being we were scheduled to fly out the same day the storm was to hit we decided it best to call our pilot via my satellite phone and get an update. Sure enough the storm had the potential to be a large one, pressure was already dropping, so we decided to have them pull us out a day early. It turned out to be a great decision as a few weeks later I spoke with one of Marc’s photographers and he said they were stuck in their tents for 36 hours. Yike, we dodged a bullet there, thanks again Marc!

We made it to Divide Lake in the afternoon; everyone was bushed and hungry so eating even took precedence over setting up our tents. Amazingly the dehydrated meals I brought were all pretty darn good. On the other hand the taste buds are so deprived out in the bush damn near anything tastes good. Minutes later in true Tombstone fashion the weather was starting to change, it was getting cloudy and colder so we set up our tents to be were ready for whatever nature wanted to throw at us. Thisonly left a little time to scout around for our sunset shoot  later that afternoon. But as it turned out the clouds/rain had other ideas and put the kibosh on any hopes of a sunset. 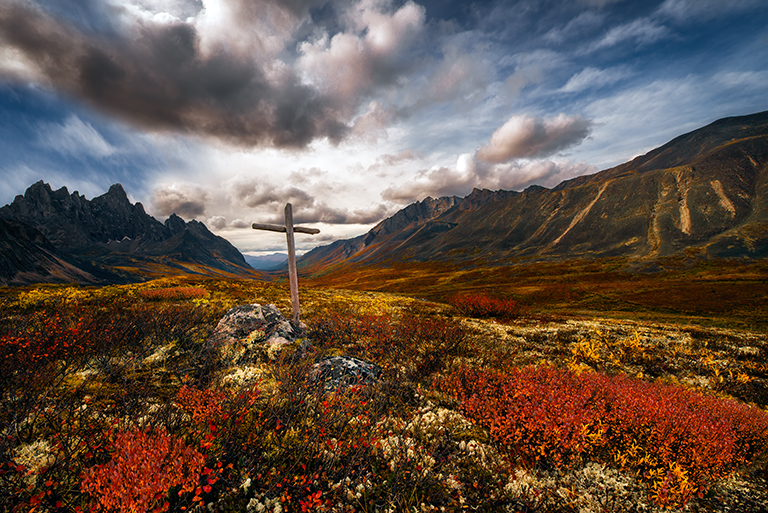 “RIP” miles from civilization and we came upon this...

We still had faith that maybe we would have the Aurora Borealis to shoot later in the night plus we had a system for Aurora watching; we took two hour shifts starting around midnight to 4am. But while the system sounded good on paper, the realty was it had flaws, like oversleeping perhaps, or nodding off?  As it turned out the rain and winds started around 11pm and continued to get worse as the night progressed. Foiled again!

As the night grew late the storm and wind intensified,  I’m not sure what time it was but one of our guy lines on our two-man tent snapped during a large gust, not good, we both worried the wind would shear the rest of the rain cover off the tent, and if that happened everything would get soaked. We jumped out into the rain and did our best knot tying job. The knot lasted all of 5 minutes! At that point I began to stuff my sleeping bag, down jacket, anything that was not waterproof into a waterproof compression sack and placed it in my camera bag. I put on my rain coat and pants and waited; if the top blew off, it would be cold and miserable but I was ready. You could hear the wind gusts as they approached, howling across the Tundra then slamming into the sides of our tent until it nearly laid flat on top of us.

The storm lasted for hours but the top held! There was no sleeping that night and into the early morning, it seemed like it would never end but finally it stopped  and we slowly emerged from our tent grabbed our cameras and captured one last sunrise before our hike back to our helicopter pickup area. 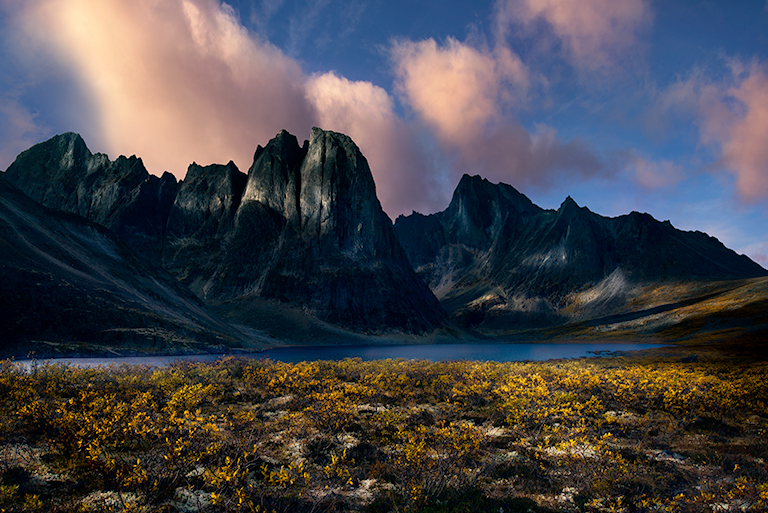 Our helicopter flight out was simply spectacular, the view of the Tundra from above revealed a kaleidoscope of color with the dramatic Ogilvie Mountains as the backdrop, but alias our time in the Tombstone was drawing to an end, and even though cut slightly short it was an incredible journey. I consider it one of the most rewarding in my career and a primer for a return trip.