Our plan was to go in early August, roughly the middle of the Monsoon Season, which increased the likelihood of nasty skies. We watched weather maps and reports as the storms began to make their trek north from as far away as Mexico and sometime storm clouds just seemed to form from nowhere. Finally a large system began to close in on mid Arizona; it was time to book flights.

We landed in Phoenix, picked up our rental car, ice chest and supplies and we were on our way! Heading north towards the Grand Canyon the weather was deteriorating rapidly, and by the time we reached Sedona we were in the middle of it. We scrambled around several areas we thought would be in line with the lightening but that was a bust. It was late in the afternoon and we were losing light so we decided to just drive to an elevated area (not the smartest place to be in a lightning storm) with good views of the beautiful Sedona Mountains and set up. It was windy and raining, at times very hard, but we were determined to get the shot. The storm was indeed over us, yike too close, but with lightning – rain – tripods what could go wrong? Well first off neither one of us had remembered to bring our lightning triggers. Idiots!!! Plus we both forgot our camera rain covers so it made an exposure more than a few seconds impossible and it was too windy for a makeshift hat cover. We did our best firing off 1 to 2 second exposures but we were still constantly wiping rain from the lens and not catching the lightning. Wow, were we really that stupid, answer YES!  After two hours of “Buck Fever”, running around in hopeless disarray the only good decision we made was to retreat, head for the nearest Brewery and call it a day.

Early the next morning we headed out to our intended stop; The North Rim of the Canyon. It’s much less traveled by tourists compared to the South Rim because of the extra time to get there and the limited lodging available. But don’t get me wrong there are still a ton of tourists.

We had about a half day before the storm would catch up to us, which was perfect as it gave us time to check with the Rangers and get to know the camping locations (which turned out to be full, including lodging). We decided to try our luck at the Backcountry Ranger station to see if they had any permits available for walk-ins on a first come basis. To our surprise we had success, and now had a place to sleep! The downside was we had to hike about 2 miles, set up camp, find a good morning comp then hike back out, to track the storms position along the Rim for our evening shoot.

The storm was firing up along the South Rim almost directly across from Cape Royal Point. Of course the Point was loaded with tourist so we moved west and ended up at a location which was away from the hordes of people. We were there in ample time to setup and get ready, which was so much better than scrambling around like headless chickens at the last minute.

The dominant curved rock wall you see is called Wotan’s Throne, with the valley floor approximately 7000’ below and only few feet from the edge! The sky in this image reflects only about ¼ of the storm cell that was over us, it was huge! I shot a vertical pano in order to capture a slice of the valley and sky. 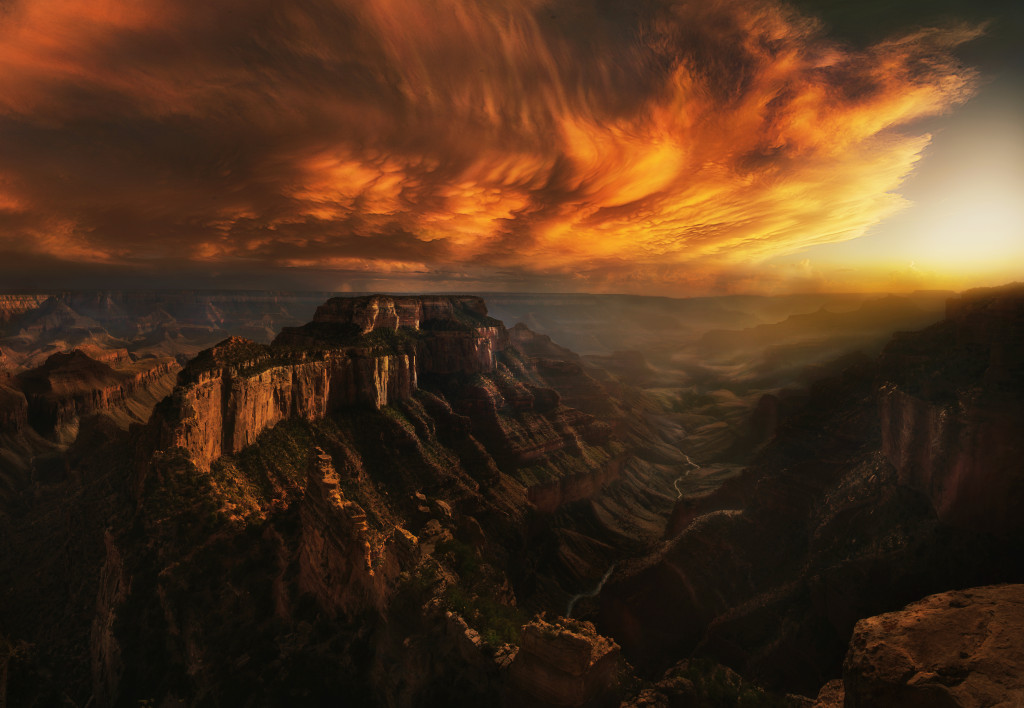 After shooting a couple days on the North Rim we tracked another possible storm moving in West of us, so we loaded up and headed out for Toroweap. We took the Sunshine Route: County Road #109, the most reliable route, leaves AZ 389 eight miles west of Fredonia.  This 61-mile road features sharp rocks, dust and only so so views until you are literally a couple miles from the Canyon. This road is remote, so gas up and make sure you have a spare tire with air in it! We even took an emergency flat tire inflator which we thankfully never needed.

About two miles before the Toroweap Lookout is the Ranger Station. If you’re planning on camping overnight its best to get a permit well before your trip at: Toroweap Permits. Keep in mind they don’t accept online or telephone permit submission. The Ranger Station does offer a limited number of permits on a first come first serve basis. This was a piece of cake for us since no one else was there camping!

They have very Spartan but nice designated camp sites along with an outhouse with a fantastic view, (watch for the bat who lives in it)! We only spent one night in Toroweap but it was a fruitful, we had wonderful skies on our morning shoot which faces East obviously, and good clouds and atmosphere for our evening shoot which we were facing the Western side of the Colorado River. While there are a good deal of bluffs to explore there are only a few that offer full exposure to the river and canyon walls.

There was 3000′ of vertical exposure with this morning shot looking east up the Colorado River. I was about 3′ from the edge after considering my backwards lean! 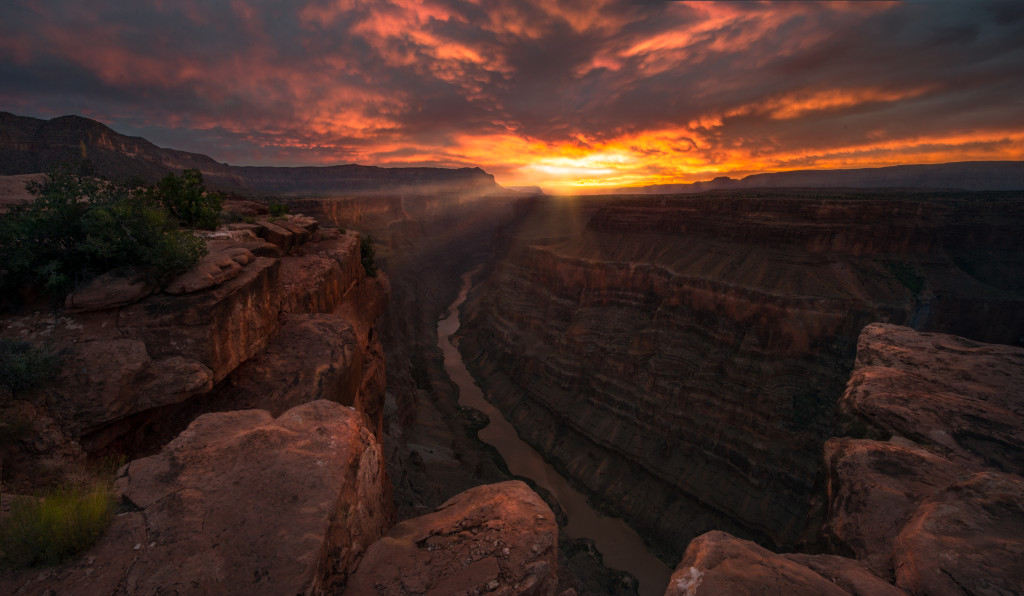 For our evening shoot, we were facing the opposite direction and about 200 yards from our prior shoot. The sun was not in an ideal position but it was showing off for us. There were multiple rows of eyelash rays that were very photogenic. The exposure was not as intense as our morning location but the winds were fierce and it made every move we made more precarious.  Thankfully it was blowing into our face and not towards the bluff. 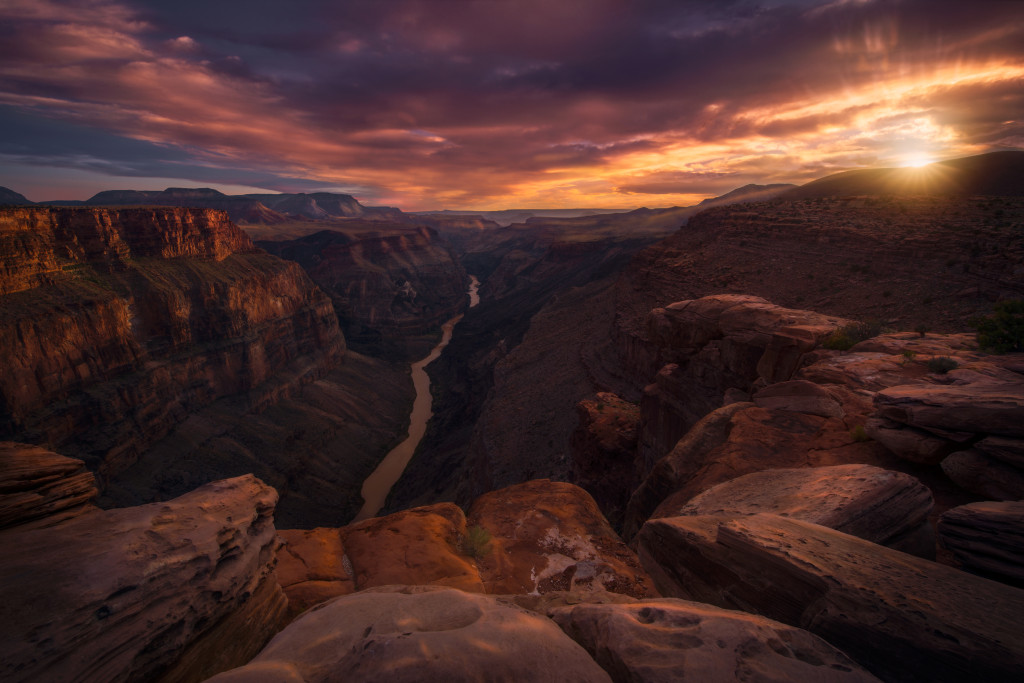 All in all, it was a great trip even with the screw ups. I you have exposures you can stick to the parks designated viewing areas which are typically framed with horizontal bars for your protection. I can’t wait to go back next year!

This last shot was taken at Cape Final, northeast from Cape Royal. There is one camp site that can be reserved with a backcountry permit. Keep in mind it is about a 4 mile out/in hike, but the views are killer! 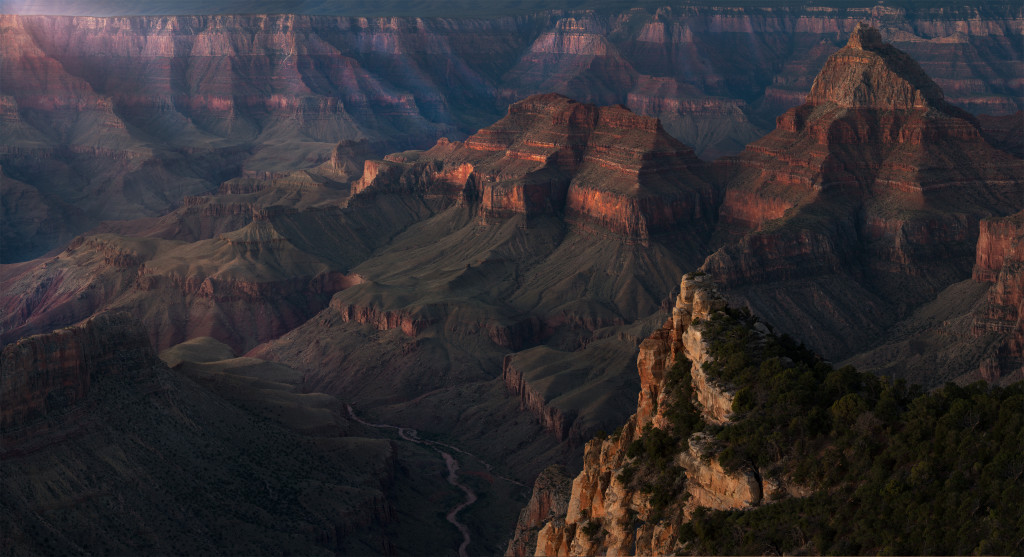